It's Time. You Gotta Use Protection.

Oops, has it been that long since my last entry?

Well, news first. I’ve put out a new story and a new song.

The story You Gotta Use Protection is R-rated, so only read it if you’re old enough, but it’s about the dangers of unprotected sex (as if you hadn’t guessed).

The new song is called Time. It’s a mix of Fatboy Slim’s Praise You and Moby’s Porcelain, a sort of techno ballad. I took parts of each, pulled them apart and morphed them together into something different but with a similar feel. I’m also releasing new mixes of eight of my songs. I’ve basically fixed some minor problems to do with timing and accents in my guitar playing and vocals by editing the wave files, improved some of the sounds and balanced the overall aural spread.

And while I’m at it, I might as well have a bit of a bitch about lulu. Having done a lot of projects, it as a real pain when you want to make a minor change, like change the cover or just replace the file. You have to go through the whole publishing process again and it loses some of the information, like what type of content it is you’re publishing. Last year, when I was on dial up, I had begun to go through my songs to use a cover template for all my songs. It was a painfully slow process that I did with any spare time at the end of the month. But lulu have revamped their publishing wizard and I can no longer upload that image as it is too small. Lulu now expects an image over 2,500 pixel wide!!!!

Talk about stupid. I think this happens because it assumes you’re publishing a book and sets the default image size to be A4 and to printable. It’s only after you’ve done the cover can you tell the wizard that you are in fact not publishing a book but a digital media product. For some reason only they know, they’ve set the process up back to front. I have call into them but I haven’t heard anything back after a few days.

But enough of that.

I’ve finally finished my 5th novel, Traitor Betrayed, and I’ve decided to try and get this one published by sending it for a manuscript assessment in the hope of getting a reading that I can present to publishers. It’s expensive (especially when you’re unemployed), but it’s about the only route available in Australia.

Unfortunately, job searching has eaten up a lot of my time and it’s a pity it has been so pointless. The only approach the job search agency has is a lowest common denominator strategy, whereby I’ve been forced to undertake ‘training’ that has no value, but opens up low paying jobs where I have to compete against hundreds of others who are younger, more qualified and, crucially, have experience. Ah well. It’s better than starving I guess, although … isn’t that what artists are supposed to do.

But I’ve still managed to spend time in Blender 3d and I’m starting to get better at 3d modelling. I’ve used it to redo parts of the front cover for The h’Slaitiarr Conspiracy. 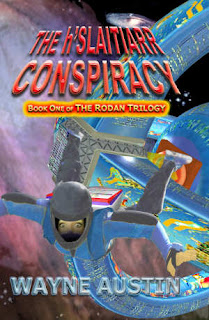 I created a backpack for Marla (the woman in the spacesuit) to replace her ill-disguised parachute pack and I’ve redone the space station. I’ve also created a hopefully more realistic black hole as well.

Doing the space station has been a great learning exercise, especially in applying UV texture mappings. That’s where you take a 3d surface and ‘unwrap’ it to a 2d form. I’ve used another view of the space station to replace the one in the cover for Rodan’s Enigma and I’ve started on a spaceship to replace my earlier effort: 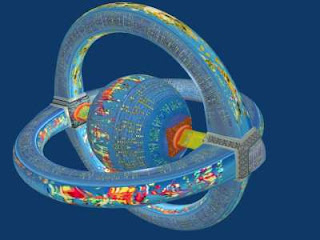 I’ll also make a variation, based on the spaceships in Traitor Betrayed to use on the cover of my collection of short stories (bar the last which is R-rated) that I’m going to publish as a free ebook on lulu. In fact, I may put a tutorial up (as a series) on creating the space station. .

In my last blog, I mused over whether we would be the last technological civilization and since then I;ve had few more thoughts. Will we be the last? What about in the far distant future, hundreds of millions, if not billions of years from now?

It took life about 4 billion years to evolve to the point that complex multi-celled species appeared, and another 500 million years for humans to appear. I can’t remember the exact figure, but I think that species on average had a lifetime between 1 to 10 million years before they either go extinct or evolve into something new.

So, given say a billion years or more (more likely 2-3 billion) before the sun makes life untenable on Earth, there is plenty of time for resources to refresh and one or more intelligent species to emerge that can become as technological as we are, or even more so. I’m assuming that humans will be long extinct.

So here are some points to consider.

Just as in the past, it should be highly probable that the continents will form up create shallow swamps and seas over large areas with a tropical climate, much like the Carboniferous Age. This may require a period where the animal population has been drastically reduced, such as after a global extinction event. Alternatively, localized coal seams may be laid down on a smaller scale, but over a longer period so that the end result is the same.

This is an ongoing process where foraminifera and other small sea creatures die and sink to the ocean floor where they get buried under sediment. They are compressed and heated as the continents move so that over millions of years oil and natural gas are created. Who knows, but within a couple of hundred million years, crude oil might once again seep out onto the surface to be discovered and used to kick-start an energy revolution.

Certain ore bodies can be created through volcanism or can become available where erosion removes the top layers of rock so they can be accessed on or near the surface. Sixty-five million years, the dinosaur extinction event also coincided with huge eruptions and lava outflows that created the Deccan Traps in India. Such eruptions will occur again and differing forms of erosion will concentrate the rarer minerals so they can be discovered and mined without too much difficulty.

Some, such as aluminium (US aluminum) require biological process similar to the coal requirements. Others, such as iron ore may not be able to be recreated as there is no free iron in the seas to be oxidized, but there are probably many iron bands underground that will uncovered by erosion.

I guess, all in all, if the right conditions occur again, intelligent life can rise up again. Whether it has two arms and two legs and walks upright in a bipedal fashion...? Who knows?