English - the Bane of My Brain 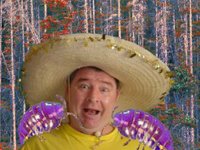 Just got back from a short holiday on the planet of Verruca IV. I thought I'd struck it lucky with a couple of the locals until I found out they had wierd tastes. Me! That's what you get when you don't read the fine print in the brochure and try to travel cheap. I astral-travelled third class in Economy. Anyway, since I had a lot of time on my hands I got to thinking....

As an aspiring writer, I've often been faced with the conundrum of which English to write in--British or American? As an Australian I also have to consider colloquialisms. Those little words and phrases, which mean something peculiar to someone in one country, but are meaningless babble to someone living in another country.

And it got me thinking ... about this hot, buxom blonde in a short skirt with--er no, I mean after that. As I lay there in my disappointment, I asked myself the question that many a writer must have pondered.

What idiots came up with all those stupid rules for English?

I must admit, I prefer American English. Its spelling is more phonetic and it gets rid of some of those pesky Frenchisms that litter English, like 'ou' as in honour and armour, and 're' on the end of some words, like theatre and centre when the pronunciation is 'er'. Then there are the annoying little differences like one l or two when putting 'ing' on the end of a word, eg travel. British is travelling, American is traveling. All in all it means less typing and hence the less chance of a typo.

So why is American spelling different to British? Is it out of spitefulness? Did the genteel intellectuals of the day, say just after the American War of Independence, decide to foster this feeling of indepence by thumbing their noses at King Gorge and saying, "By George, we shall not speak the King's English in this fair and free land!" (I really should have done some research on this to back up my argument, but hey, after all these years who can teach an old dog new tricks?)

I know english is a mish mash of other languages and it absorbs words like a sponge soaks up water, but why does it have so many arcane rules?

There is the silent but deadly k in front of some words (knife comes to mind), and its pal the silent p as in psycho. Add to this are the rules like i before e, except after c (unless you are weird). And then there's the use of 'ph' in place of f--pharmacy, phone, phoney! Was this a prank? Was someone trying to be phunny in a phutile attempt to be clever? This beggars my imagination, which, admittedly, isn't much to beggar. Frankly, it's buggered and you can take that any which way you like. Personally, I think it's ph@#*king crazy, and you can quote me.

Then there are other oddities, like whether to use 'ize' or 'ise', as in brutalize and centralize, which can also be brutalise and centralise respectively. And yet there is no advertize.

It's no wonder I sometimes feel the urge to go and bang my head against a wall. How must it be for all those poor suckers whose (whose or who's? yet another crazy conundrum) first language is foreign and who have to learn english? Just how many have broken under the stress and have been locked away in psychiatric instutions because there are no wonder drugs to help them? I bet there are no statistics. But there should be, because statistics can lie and where would any politician be without a good statistic?

And yet, as I thought about it, the answer came to me--I am the world's dumbest genius after all!

There is a third english. We have Britsh, American and ... Pigeon. Yes! Pigeon English.

And it's so easy to learn. There's only one word: coo! Okay there's also coos, cooing and cooed, but that's just splitting hairs. There's only one main word. It's incredible, when you think about it, that the humble pigeon has its own version of english. Apparently it was big (and may still be in some places) through the pacific islands and New Guinea. I doubt if they may have even seen a pigeon and yet its influence has spread far and wide.

I have no idea how it arose--maybe a pigeon fancier came up with it. Perhaps he--it would have to be a he, women aren't that stupid (hey, how come, when I suck up like that, I still can't get laid?)--spent too much time alone with them and after awhile that murmuring sound of theirs began to sound like a word: coo. He was probably nuts by then. But he spread the word and it caught on. Wherever english explorers went, like rats, cats and terrible diseases, pigeon english followed too.

In Australia we have a variant in our own vernacular: cooee. It's yelled out by people lost in the bush and who want to be found. Originally it was straight pigeon english and those early immigrant ornithologists, who found themselves lost in the great outback while looking for new and wonderful species of pigeon, would yell out 'Coo!' for days on end since it was the one word that they knew everyone was familiar with.

But, as was the case, they would either run into bands of outlaws out hunting pigeons for the nights main meal of pigeon pie and damper, or they ran into marauding bands of angry natives, mad at the sudden drop in the numbers of native pigeion species, due to them being shot and sent back to Ol' Blighty to be stuffed and mounted for public display along side kangaroos and koalas.

Either way, as these misfortunate pigeon fanciers staggered around in circles, slowly dying from thirst as they kept calling out 'Coo!' they would be shot or speared. Now, as is the case with being shot or speared, the usual exclamation is 'Eek!' which is a subtle but more succinct way of saying 'Ow! That hurts!' And so, as these wounded pigeon fanciers staggered away, they kept yelling out 'Coo eek! Coo eek!' The 'Coo' because they wanted to be found and the 'Eek' because it hurt so much each time they yelled out 'Coo!' But, because we know the k is silent, it became 'Cooee! Cooee!' And with the passing of time, this seeped into the Australian vernacular, long after the last pigeon fancier had bitten the dust.

So it begs the question. If pigeons have their own english, why don't other animals? Why isn't there a turkey english? After all they have their own word: gobble, and it's more complex and sophisticated than coo. What about cats and dogs? So much for being man's best friend.

And why is english the only language to have an animal variant? Why isn't there a pigeon french? Or pigeon chinese? What have they got against pigeons? Or is it only because I don't speak any other language that I've never heard of these versions? (Or it could be because, once again, I haven't done any research.)

I'll end here before I get started on the whacky spelling of foreign words that are nothing like the way their phonemes would be spelt, otherwise, I'll be ranting for days.

Oh by the way, my second novel, Rodan's Enigma,

is up on lulu (print and ebook), as are thirteen songs for download as mp3s at 79c US each. Check my website www.futureriff.com/novels.html for details. The first chapter, it can be downloaded for free from there or from lulu: ebook.