Faster-Than-Light — Yet Another World.

Goto www.futureriff.com for free stories. And check out my songs.

News first: Pyran’s Dilemma, the last book in The Rodan Trilogy, is now out at lulu.com in both print and ebook versions. Here is the cover: 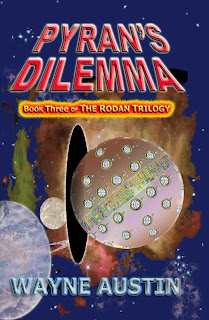 “Why?” you ask? I can’t help myself, I’ve finally been brainwashed by all those stupid ads selling cheap rugs or cheap bedding or cheap.... I think you get the point.

Actually, I just thought that a lower price might lure more people to buy it. $US5 as roughly $6 - $7 Australian which is really cheap compared to a paperback ($28 - $35) but I realize that in the US the price can be down to ~$US7 so the risk of buying an ebook novel from an unpublished author might seem greater. Just think of this as risk management.

I’ve also put out another song on lulu: Run Away. Like all my songs, it costs US 79 cents. It’s an upbeat song about overcoming fear and has a mix of ballad and rock with a trumpet and tuba and strings. I like it, but then I’m prejudiced.

In trying to think up a new FTL strategy, I pondered Einstein’s Special Relativity. When I was in high school and university (all those centuries ago) I was fascinated by it. One thing that’s often attributed to Special Relativity is that it says that except for light, nothing can travel faster than the speed of light, but that’s not strictly correct. Special relativity says that nothing travelling at a velocity less than the speed of light can accelerate to the speed of light. What stops this from happening is a little mathematical term with big implications: the square root of (1 - (velocity/speed of light) squared).

Say you’re observing a spaceship accelerating away from you. Some things that you observe, like length, are multiplied by this factor and you see their values go to zero as they approach the speed of light. The object appears to shrink along its direction of travel. On the other hand, values like mass and time are divided by this term and their apparent values increase. Each tick of a clock you see will go slower and slower until it seems to freeze and because the spaceship’s measured mass increases to infinity the energy required to keep accelerating it tends to infinity as well. And that means a spaceship can never accelerate to the speed of light.

But what about if there were particles or forms of matter which already travelled at velocities (v) greater than the speed of light (c)? The term becomes what is called an imaginary number — it contains the square root of -1. The physical implications of this have been generally dismissed as being meaningless, although scientists have hypothesized FTL particles called tachyons, but they have never been observed.

So why can’t there be a physical equivalent for some kind of FTL space where the above factor isn’t meaningless? Where there are forms of matter, which can’t decelerate to the speed of light? Maybe it could be an inverse of our real universe, but not the fabled sub-space or hyperspace. I’ve called it high-space for higher than the speed of light, but maybe I should call it dark-space since dark matter and dark energy are all the rage amongst cosmologists at the moment. Dark energy is supposed to be a repulsive energy that is supposed to be causing our universe to expand at an accelerating rate and dark matter is supposed to surround our galaxies with a negative gravitational field that allows our galaxies to rotate at a rate where they would be expected to fly apart.

Okay, it’s not quite dark matter, but it does give rise to some interesting possibilities. Let’s suppose that in this scenario our human civilization has developed a drive that can switch a bubble of space into this high-space, but there is no warp drive or hyper-drive. How does this bubble then accelerate to hundreds or thousands of times the speed of light? I decided that if a spaceship switched when close to a star, its bubble could slide down the high-stars’ mountain slope, like a skier racing down a ski slope, and then the bubble could coast across the plains between stars until it run up the slope of another star, where it then switched back.

This now gives a means of travelling from Zaccarus IV to Beligro Minor via a network of stars if they aren’t in line of sight of each other. In this world, space travelling consists of taking a ship close to a star, aiming for a distant star and then switching to high-space. Its final velocity depends on how close to the star it gets, ie how high up the mountain it will start from. For the sun, I decided on a typical switch distance of twenty million kilometres, which would result in a speed of ~1200c on the flat plain. This meant that trips ranged from a few days to a month or so.

All this sounds great, but it can’t be that easy can it? There must be some downsides that can be used to help drive the plot.

As I thought about it, one thing was clear: there was a large difference between velocities in normal space and high-space. Aha! Momentum. Mass times velocity. It’s a simple an elegant equation, much beloved by those who love it (physicists, I suspect), but it can have a dark side. Put your foot down on the accelerator and you can feel the change in momentum push you back in your seat. It’s great! You revel in that rush of adrenaline, but if you slam into that oncoming truck at a hundred kilometres an hour, the change in momentum in going from 100 to 0 kilometres an hour will really hurt. Big time.

Unless you’re wearing a seat belt and have a fantastic airbag.

Momentum was my answer. In switching to high-space there would be an instantaneous huge change in momentum, but the bubble would, to a certain extent, act like an airbag, but only so far. Travel too close to the star’s surface and the momentum change could injure you and destroy your ship. And conversely, switching far from a star results in too little acceleration and trip times go from days or weeks to years at just above the speed of light. That’s plenty of time to die from starvation before the power runs out.

Basically, that’s interstellar travel defined. There are a few other perks to consider — the plain is more like travelling through a cave since space is three-dimensional and won’t be smooth. Planets add hillocks and asteroid and comet belts add ruts and cobbling, which can make travel uncomfortable, and nearby stars and nebulae can create humps that intersect your travel vector. And then there is the problem of passing slower ships and avoiding oncoming ships.

In the Rodan trilogy I have ion spaceships travelling in convoys for up to two weeks and using the exhaust from one ship to fuel the following ship. In the Zhivar trilogy, I have ships refuelling and also taking on additional fuel tanks that have been refueled and parked around fuel depots at Lagrange points around the planet. In the solar system a ship would take three days to travel from the Earth to Mercury’s orbit, where twenty or so fuel depots orbit. The ship drops off its surplus fuel tank, refuels and dive toward the sun before switching. At the other end of its trip, it switches back and climbs out of the stars gravity well to a fuel depot where it refuels, links up with an extra fuel tank that it either owns or rents, and then travels out to the destination planet or whatever. This can limit stars to where a ship can travel to as not all stars have planets, however, a ship can travel to a star for the sole purpose of aiming for another star and just passing through.

So now we have a universe where interstellar travel is via a network of stars with fuel depots, which can be supplied from as far afield as comet belts out on the edge of the star system. Where there are fuel depots there can be maintenance workshops for services and repairs, spaceship dealerships, freight depots and a host of other businesses and other industries and the space can be quite busy in a thriving commercial environment.

And suddenly worlds come alive. Throw in a host of alien races, all more advanced than humanity; stir in the relics of an old federation, each with their own political agendas and limit just where humans can travel on the pain of something worse than death and there might just be an idea for a novel or three....
Posted by Unknown at 4:17 PM No comments: